The Serversky P-35A was born out of a USAAC requirement for a single-seat fighter tendered in 1935. 76 P-35’s were built and delivered to the USAAC between May 1937 and August 1938. The Air Corps stopped delivery of the P-35 in 1937 in favour of the Curtiss P-36 citing their dissatisfaction at the slow delivery rate and the sale of the 2PA two-seater to the Japanese Navy as their reason for discontinuing the contract.

Despite this setback, Seversky continued to develop the P-35 with the intention of exporting the aircraft. Seversky re-submitted the design to the USAAC in 1938, two P-35’s, the XP-41 fitted with a 1,200 hp (895 kW) R-1830-9 engine and the AP-4, which had a turbo-supercharger mounted in the belly of a deeper fuselage were tendered. The Air Corps preferred the AP-4D, which was ordered into production as the P-43 Lancer. 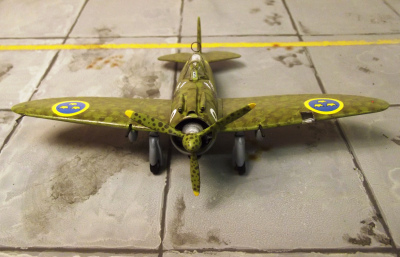 In an effort to increase sales, Alexander P. De Seversky took a demonstrator on a tour of Europe in early 1939. Sweden ordered 15 EP-106 aircraft on the 15th of June, these were re-designated the J-9 by the Swedish Air Force upon delivery. The Swedish Air Force ordered 120 aircraft, receiving 60 J-9s in the spring-summer of 1940. The aircraft were operated alongside other units assigned to the F 8 Air Force base protecting Stockholm, replacing the obsolete Gloster Gladiators. Swedish J-9s served with the Flygvapnet as a fighter until 1946. 10 aircraft were equipped with cameras but retained their J-9 fighter designation. In addition, a number of others were used for liaison and flight training. The last seven J-9 aircraft remained in service until September 1952.

On the 18th of June 1940, the United States declared an embargo against exporting weapons to any nation other than the United Kingdom. Despite this, Republic continued to manufacture the EP-106. Sweden’s second batch of 60 aircraft were requisitioned by the USAAC on the 24th October 1940 and re-designated the P-35A. The aircraft were re-armed to American standards with a pair of 0.50in machine guns mounted on the top of the engine cowling; these aircraft retained their Swedish specification 0.30in machine guns mounted in the wings. The Flight instruments were metric, and the cockpit placards, stencil data and flight manuals were written in Swedish.

Three of these aircraft were kept in United States as instructional airframes for mechanics; six P-35As were delivered to Ecuador to form the first combat unit: the Escuadrilla de Caza. The remainder were sent to the Far East Air Force in the Philippines during February 1941. 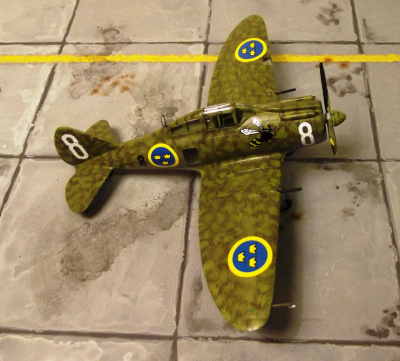 Eventually all of the pilots of the three pursuit squadrons based at Luzon transitioned onto the P-35A from the P-26. Most P-35s were assigned to the 17th and 20th Pursuit Squadrons; all were lost in action early in the war and were hopelessly outclassed by Japanese fighters. Nearly all of the P-35As were quickly shot down in combat or were destroyed on the ground, 10 were lost in accidents. By December 12th, 1941 there were only eight airworthy P-35As left in the FEAF.

The P-35s were used primarily as gunnery trainers by all three squadrons because of a critical shortage of .50-caliber ammunition in the Far East Air Force. In October 1941, the P-35s were earmarked for transfer to the Philippine Army Air Corps after being replaced by Curtiss P-40 Warhawks in Far East Air Force service.

The kit is supplied in an end-opening box with attractive box art on the front and four full colour profile views of the J-9 on the reverse. The injection moulding is crisp with fine recessed panel lines. No sink marks or blemishes were apparent and the fit of the fuselage halves was good.

The instructions come in an ‘exploded-view’ format in 13 steps. These are clear and easy to follow, with each stage presented in a logical style. 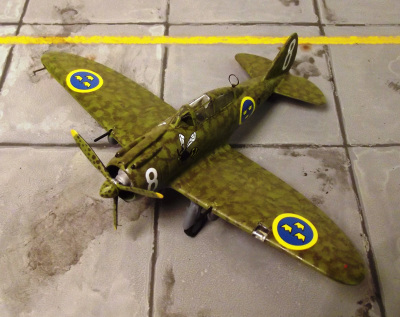 The parts were washed using a warm-soapy solution to remove the mould release from the kit and then dabbed dry. All of the parts were then sprayed with auto-primer from a rattle can. The interior was airbrushed with Humbrol 226 interior green. Stages 1 to 9 deal with the construction of the aircraft interior. The cockpit is exceptionally well detailed with an incredible assortment of parts that would grace any 1/32 scale kit. Both seats are furnished with photo-etched seatbelts, foot-pedals, a 3 piece instrument panel, throttle assembly and a well detailed moulded floor and cockpit side-walls that provide options to model this aircraft with the canopy and rear crew compartment window open.

The engine is supplied in three parts which can be easily enhanced with the addition of copper-wire pushrods and HT leads. Once the cockpit and engine had been completed, the fuselage halves were glued together and set to one side, the upper and lower wings were glued and both sub-assemblies were left to set overnight. 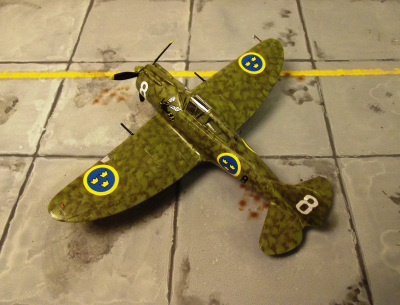 Next, the wing assembly was fitted to the fuselage. The fillet joint between the fuselage and the upper-wing did not require any filler; small amounts of green putty were required between the engine cowling and forward lower-wing join and the rear lower-wing join connecting to the rear fuselage. The filled areas were sanded down using 600 grit wet and dry paper and accessories from step 11 such as the engine cowling scoops, nose guns and ammunition collector fairings were added before the aircraft was given a second coat of grey auto-primer from a rattle-can.

The lower-fuselage was then airbrushed with Humbrol satin 127 which I selected as a close approximation of the blue-grey undersurfaces for this aircraft. In addition, the wheel hubs and undercarriage doors were also airbrushed with Hu 127. Once this had dried, the aircraft was masked off in preparation of the application of the first coat of paint on the upper-surfaces. 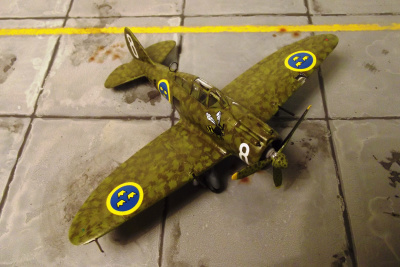 Four options are available in this kit. All are examples of Swedish Air Force machines, I chose ‘Camo C’, J-9, F8-White “8”, 1st division, F8 Wing, 1942. This aircraft sports a two-tone ‘Italian-style’ scheme of Zinc-chromate (Humbrol matt 36 – 70% + Humbrol 117 – 30%), over which I added a ‘mottled’ effect of Humbrol matt 155 olive green, applied with a stippling brush. After this had been left to dry for approximately 30 minutes, the scheme was over-painted with heavily thinned Humbrol 116 dark green. This softened the edges of the mottled olive green. The main-wheel and tail-wheel tyres were painted using Tamiya XF-85 Rubber Black. Once dry, the J-9 was post shaded and given a wash of Windsor & Newton ivory black oil paint. 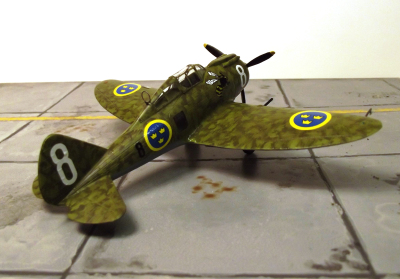 The last stage of construction included the addition of the exhaust stubs, pitot tube, wing-guns, aerial loop, main undercarriage and doors. Finally, the decals were applied using micro-sol and micro-set decal setting solutions. The decals were of good quality, opaque, thin and in register. This kit has been on my shelf for some months due to a reluctance to build because of the complicated camouflage scheme. It was however an enjoyable build and as always Special Hobby does not disappoint. 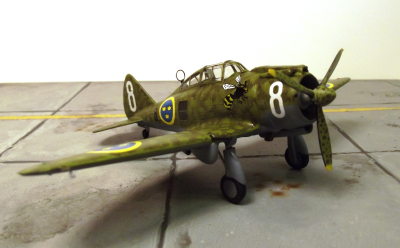 The Battles of Coronel and the Falklands