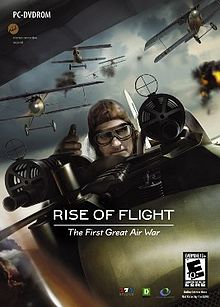 Rise of Flight: The First Great Air War (Russian: Война в небе – 1917) is a World War I combat flight simulation video game developed by 777 Studios and released on May 7, 2009. (PC-DVDROM).

Rise of Flight is a flight simulator depicting aerial warfare over the Western Front during the First World War. The timeline of Rise of Flight covers 1916 to 1918. The included game map covers over 120,000 square kilometres (46,000 sq mi) of the Western Front (roughly equivalent to the size of the U.S. state of Pennsylvania), eastern Ukraine and the English Channel. Two flyable aircraft are included in the base game demo (Albatros D.Va, SPAD XIII), with additional add-on aircraft from 1916 to 1918 available for purchase online. Each plane and the simulation of its respective engine and weapons, according to the developer, is modeled in great detail. Furthermore, the game renders damage to the aircraft resulting from airframe stress, battle damage, fire, and collisions.

The 3D map with many towns, rivers and ‘aerodromes’ was designed according to the historical maps and information from the war years of 1914-1918. The game features several games modes: Quick Mission, Single Missions, Campaign, Career, and Multiplayer.

The game features aircraft from both the Entente and the Central Powers. Users can create their own missions using the provided Rise of Flight mission editor.

The level of artificial intelligence of the NPC pilots of Rise of Flight is based on non-linear decision making methods, making game situations less predictable for the player. This means that there is a difference in flying skill between the novice AI pilot and that for a veteran pilot or Ace. A triggering system allows one to design missions where AI pilots operate independently, or they can be instructed to follow preset scenarios.

The supplied Rise of Flight Mission Editor allows the user to create both simple and complex missions and provides an opportunity to use a user’s creativity in order to build missions. Each object’s movement, rotation, cloning and more may be modified. Objects can be grouped and saved to media, re-imported and further used as separate groups such as standard flights of planes, convoys of motor vehicles, or standard types of buildings and other infrastructure. Missions may be imported and allow swapping content such as plots and objects between mission designers easier. This ‘group, copy, cut and paste’ feature helps to speed up the creation of really complex missions. Game cameras provided with the mission editor can also be used for movie creation. Within the game engine, cameras belong to the mission and can be operated as a part of the game process without interruption.